REPORT AFTER OPTIMISATION EXERCISE No 4

This is the fourth article taken from a report which was prepared for various departments in a process company after some optimisation work was performed for them.  (The other two articles were published in preceding months).

Once again, the first example in this article is of a success story.  The loop in question is the control of an important temperature.  The operators were controlling it as well as they could, but mostly in manual, as it didn’t seem to be able to hold the temperature at setpoint in automatic.  There were frequent load disturbances and the temperature jumped around badly.

Open and closed loop tests were performed on the loop, and it was found for once that the control valve was not the culprit, but was in fact operating very well. The problem lay with the tuning.  The original tuning had a proportional gain of 1 and an integral of 12 minutes per repeat.  This is tuning typically for a relatively slow temperature process, but this temperature did in fact have quite fast dynamics.

A new tuning with a proportional gain of 1.5 and an integral of 2 minutes per repeat was then inserted into the controller.  (This tune has good robustness, i.e.safety factor).

The “before and after” performance of the control is shown in Figure 1.  This recording is taken from the plant’s trend recording system, and unfortunately is not of great quality, but it does show the remarkable improvement in control variance.  By the way the scale of the temperature is zoomed up quite considerably. On a scale of 0-100% the temperature would be drawing a straight line.

This is a typical case of poor original tuning.   Temperature controls, being relatively slow are notoriously difficult to tune, by the normal “trial and error” used in 98% of all tuning.  It shows the importance of using a good tuning packet.

The second example is a dramatic one of a huge problem which shows how important flow loops can be.  This is the control of combustion air flow in a boiler system. The flow of air is controlled by means of a damper. Figure 2 shows an open loop test on this loop.

The damper is very bad and there is no way that any even reasonable control can be obtained.  The damper has stiction particularly on closing, and the controller output moves through 12% and then the damper bangs down.  There is little repeatability on it.  It is essential that this be sorted out if any reasonable boiler firing control is to be achieved.  This is a vitally important control.

The cycling caused by this control is affecting all the other loops and causes cycling even on the steam temperature which is controlled by a sophisticated cascaded desuperheater control system.  It is impossible to just tune the loop.  The damper needs repairing or replacing before any decent control can be obtained.

The last example, also of a problem loop is that of an important pressure control.  This control modulates the feed to a large distillation column. It is very important to keep the feeds to distillation columns as steady as possible, as fluctuating feed creates all sorts on instability in the processes in the columns, which the controls downstream cannot deal with effectively.

In this case there was a large problem with the pressure control valve as can be seen in Figure 3, which shows an open loop test.  (The valve had been serviced recently, and it is a common complaint in plants, that valves coming back from service often display more problems after the service than they did before!).

The test shows a big overshoot on the valve on opening, and a massive overshoot when closing, which was causing control problems.  This is probably due to excessive stiction in the valve and poor tuning of the positioner.  Luckily the pressure was relatively slow which still allowed relatively good control of the feed to the column. 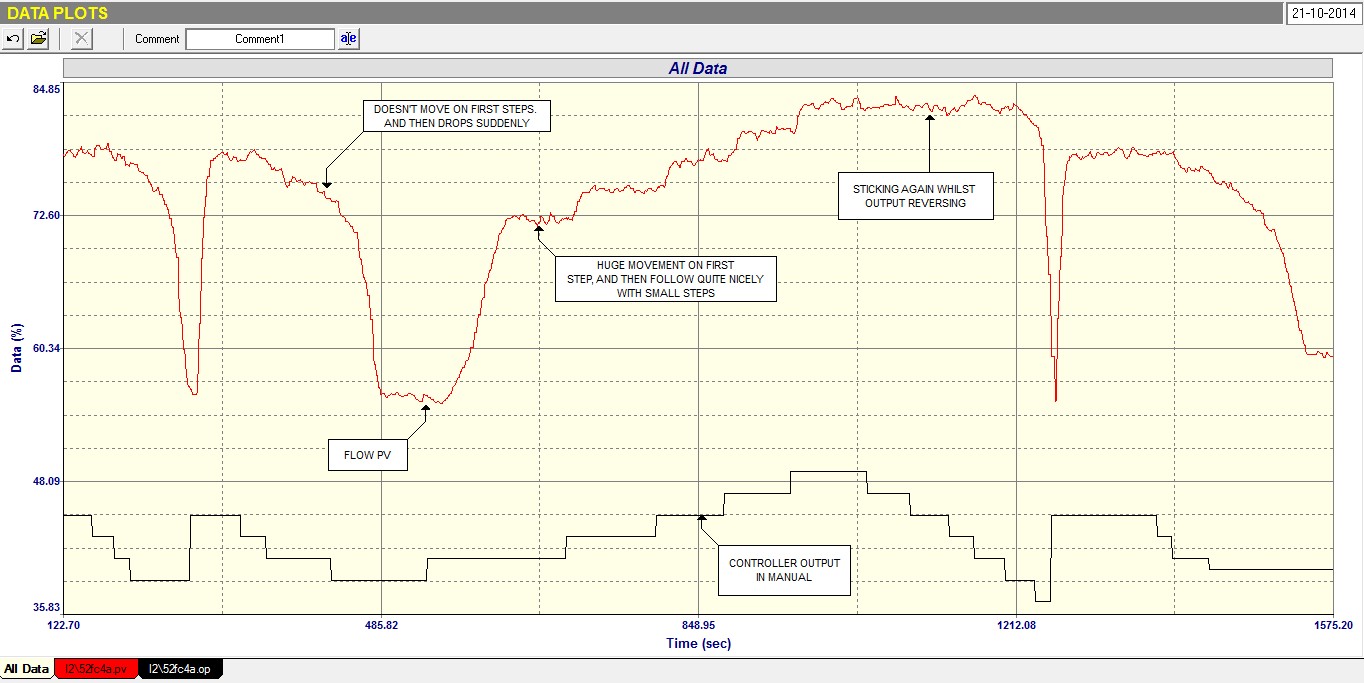