In this article we look at three cases where great successes were achieved by optimisation.  The work was all done in a petro-chemical refinery.

The first is of a reactor feed temperature control which was always in manual, as the loop went wildly unstable when placed in automatic.  This is a vitally important temperature as it affects products way down the line.

The optimisation tests showed that for once there were no problems in the actual loop, and that the valve was operating really well.  The only problem was with the original tuning which was:

The new tuning as given by the Protuner loop analytical and tuning software was:

The new tuning parameters worked like magic.  The “before” and “after” performance is shown in Figure 1 which is taken from the trending package in the plant’s DCS.  The terrible instability taking place before the tuning, and how well the control kept the PV on setpoint with the new tuning can be seen in the figure.  This control kept the PV on setpoint amazingly well in spite of pretty continuous load disturbances occurring which can be seen by the fact that the controller output is moving around quite a bit to keep the variance out of the PV.

As mentioned in previous articles, slow temperature are widely regarded as being extremely hard to tune as it takes so long to see the responses, and normal trial and error tuning often becomes almost impossible as can be seen in this example.  It is not so serious if the process is relatively stable and is not subject to frequent load changes.  In these cases one can get away with slow tuning which may take forever to get to setpoint on any change, but if there are steady state conditions with no changes then it stays on setpoint and looks good.

The second success is of two highly interactive loops, a temperature and a flow, both of which had always been running in manual, as they immediately started cycling when placed in Auto.

Unfortunately feedback control systems don’t like interactivity, and the best way to decouple interactive loops is to use dynamic decoupling which is inserting feedforwards in each loop to counter the effects of other loops.  However the vast majority of interactive loops do not use this sophisticated technique.  So how do Operators stop the interactive loops from cycling?  Very simple.  They just put one or both of the loops in Manual.  Hereby lies the answer on how to decouple loops without resorting to dynamic decoupling.  All one has to do is to tune the one loop as fast as possible, and the other so slowly that the loops can’t interact.  (I have often referred to terribly slow tuning in my articles as being tuned “close to Manual”).

In this case we tuned the temperature loop (which is the more important of the two) as fast as possible, and the tuned the flow loop terribly slowly.  This did not matter in this case as the flow is very stable and not subject to sudden or frequent load changes.

Figure 2 shows the loops both running in Auto and keeping the processes on setpoint with no apparent effect on each other.  The recording was taken over a period of 15 hours.  Setpoint changes were made on each loop and the PV’s followed beautifully without affecting the other loop.

The third example is also of interactivity between two level loops.  This is actually one of the hardest problems I have ever had to deal with as the loops are of critical importance, and all production downstream from them is dependent on their performance.  The loops have always presented a major problem for the Operators who ran them in manual with much difficulty.   Both processes cannot be moved too much as apart for affecting production drastically, a large move can trip the whole plant, which can take days to start up again.  It took many hours performing the tests making tiny steps and trying to get representative and repeatable responses from which the process dynamics could be established for tuning and trouble shooting.

In spite of the care taken, one of the loops reacted terribly badly to a rather large step made on the other, and if it hadn’t been for a particularly alert and very bright control engineer who was making the changes, and reacted with amazing speed, the plant would have tripped.  This prevented us from tuning the one loop as fast as we would have liked, and resulted in having to use slower than desirable tuning in both loops for robustness (safety).  Even so the results were amazing.  Figure 3 shows amongst many other critical control loops associated with the two levels, a 15 hour test with both levels at the same setpoint running in automatic.

It can be seen near the end of the test where a particularly large load change on the flow into one of the vessels occurred, but the control coped extremely well with it.

This is one of those successes which make my job so worthwhile and satisfying. 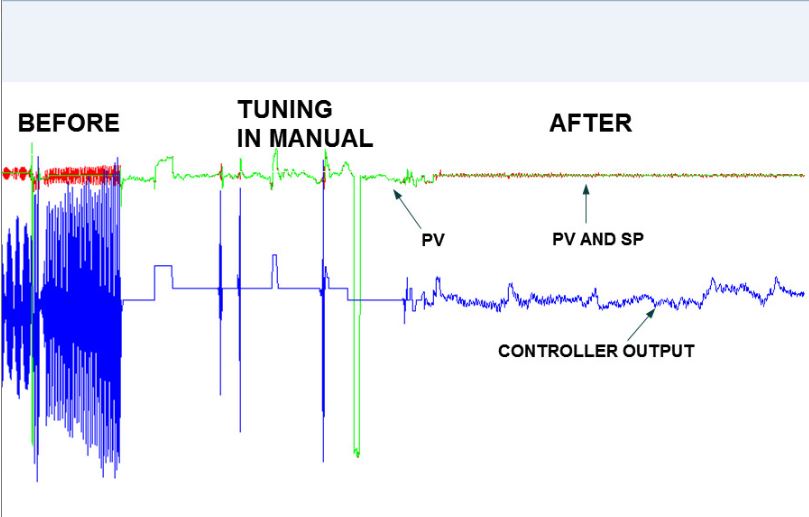 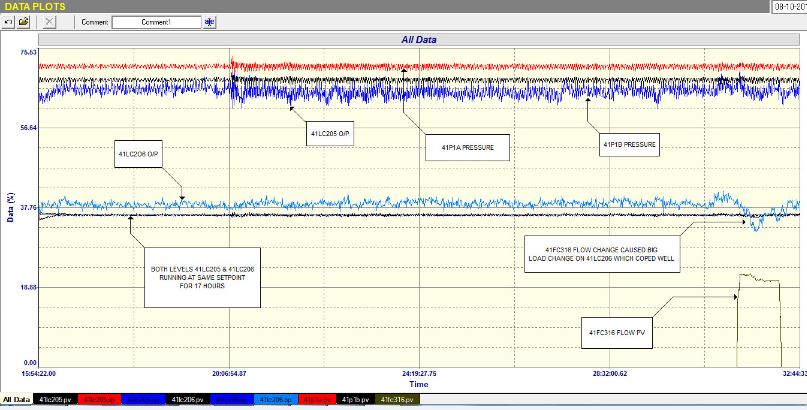