THE IMPORTANCE OF UNDERSTANDING YOUR CONTROLLER

Contrary to popular belief, there is no such thing as a standard PID controller. Every manufacturer makes his controllers in a unique fashion, and as a result they generally behave differently to another make of controller. It is therefore absolutely vital for the user to fully understand all the characteristics and features of the controllers in his plant if he wishes to achieve optimum control. Unfortunately many manufacturers supply very little information or training on really vital points that the user should be aware of.

A few of the most important things which determine a controller's characteristics are:

1. Controller Algorithm: This is the "PID" equation that the controller solves when calculating the output value. Three versions are in common usage. They all achieve the end result of control, but require different tuning. One of the algorithms in particular, virtually precludes hand tuning (i.e. tuning by trial and error), as the I and D values apparently change when the P term is changed. This can be very confusing to a user. In the case of digital controllers the algorithm is commonly implemented by one of two methods. The first is known as the positional implementation, and the second as the velocity or incremental implementation. They both have advantages and disadvantages which the user should be familiar with.

2. Controller Scan Rate: The cycle time of the controller can be of extreme importance when calculating tuning parameters to ensure stable performance, particularly in fast loops. It is also important when setting scan times for associated digital transmitters which should scan at least five times faster than the controller. Some digital controllers have insufficient mathematical power to accurately calculate slow integral values at fast scan rates, and the manufacturer should warn the user to lengthen the scan rate in these instances.

3. Derivative Filter Time Constant: Also called "derivative rate" by some manufacturers, the filter reduces excessive D action which would be encountered in digital controllers without the filter. It must be taken into account when calculating the D parameter. The user should understand how this filter operates, particularly if it is adjustable.

4. Process Variable Filter: Many digital controllers offer virtually unlimited filters on the Process Variable. The use of large filters can cause severe problems that the user is often not even aware of, as the filter tends to hide problems on the DCS screen and trend curves, rather like an ostrich burying its head in the sand. Problems that can occur include increased control variance, huge overshoots (typically 250%) on setpoint changes, poor product quality, tanks overflowing and running empty, relief valves lifting, plant trips, and many other problems.

5. Controller Response to Setpoint Change: Very few people are aware that most controllers from the late 1960's have been configured to respond to setpoint change differently than they do to load changes. The reason for this is to limit fast output movement on setpoint change. Most controllers are constructed so that the P and I terms act on error (the difference between setpoint and process variable), and the D term only on the process variable. With the advent of digital technology many modern controllers have only I acting on error, and P+D acting on process variable. Some more sophisticated controllers allow the user to choose the configuration that suits his application best. Lack of understanding of this point often leads to dramatic and sometimes serious and costly results. An example is given below of a case where a company could have increased its throughput of its batch reactors by some 20% if they had chosen the correct configuration. Another serious implication of the controller with P+D acting only on process variable, is that the controller can not be tuned by the conventional trial and error technique where setpoint changes are made so that the controller response can be studied as changes are made in P, I and D.

6. Anti Reset Windup: Digital microcomputers can handle huge numbers. This makes it imperative for a digital controller to incorporate good internal anti-reset windup. It is also vital that the controller be capable of implementing external anti reset windup if it is to be used for cascade control, or for strategies employing selective signal control such as override control.

7. Non-Linear Control Algorithms: Many modern units allow the user the choice of various control strategies such as error squared on P, error squared on P+I, error squared on I, integral gap control, gain scheduling, and many more. Most users are unaware of how these algorithms are used and what incredible benefits they offer if properly used in the correct applications.

A case of extremely costly use of incorrect control action on setpoint change is illustrated by a pharmaceutical company in the UK, who have a large temperature batch reactor plant. Products are placed in the reactors and setpoint is then changed in a step from ambient to a higher value, where they are kept for a fixed time.

(Note: Batch temperature control requires P+D control terms. The I term can not be used with an ordinary controller, as overshoot will result).

The company had used their default controller configuration of P+I on error, with D on PV. The resultant response is shown in the top figure. During a course in their plant it was pointed out that full P+I+D on error would provide a much faster response. This is shown in the bottom figure. Setpoint was reached an amazing 32% faster! Calculations revealed that they could increase average production through their plant by at least 20% with the new configuration. Unfortunately for them, production in a pharmaceutical company is monitored by various drug authorities of countries into whom the products are sold. After initial approval certification, the plant is "sealed", and no further changes in production methods can be made without resubmitting documentation and obtaining approval. The company estimated that this would cost them over £150,000 in time and documentation and other costs.

The moral of the story is: "Understand Your Controller"! 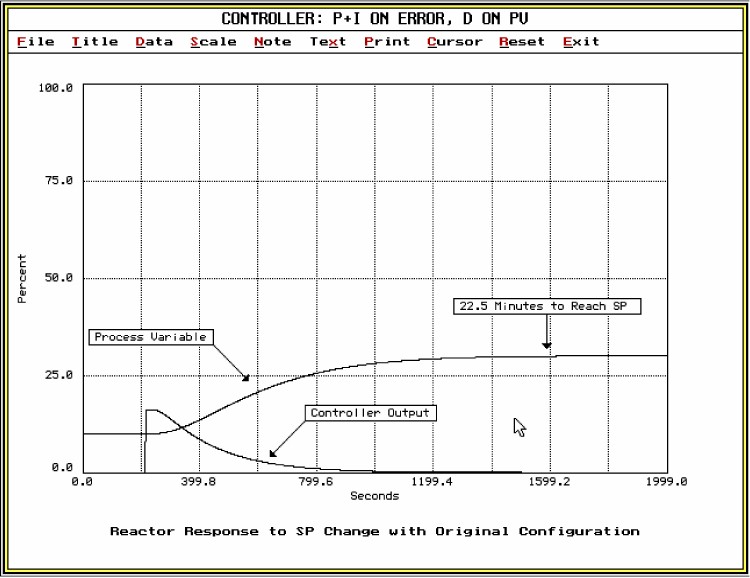 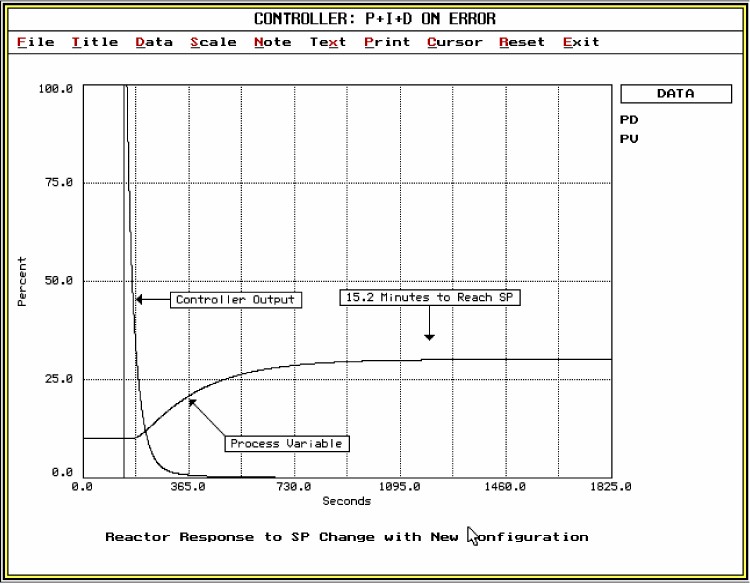