ALL PROBLEMS CAN BE SORTED BY TUNING

People often battle for long periods trying to tune a controller to eliminate problems.  As I have often said one of the biggest fallacies found in plants when it comes to control is that all problems can be sorted by tuning.  Usually when a problem with a control loop arises the first thing the process people say to the C&I department is: “Please send someone round to tune the controller.  The loop isn’t controlling properly”.  I have found many C&I technicians and artisans who will spend hours and in some cases even days playing around with the magic P, I, and D knobs trying to get a tune that works, instead of trying to analyse the problem and find out why the loop is not working.

Generally if the loop can be controlled in manual, then the tuning ends up working because they tune it terribly slowly. I define manual control as infinite slow tuning.  Therefore if you can slow the tuning down sufficiently the loop will apparently start controlling, provided that the process is stable and changes are not occurring.  This results in loops looking great on trends running in automatic, with processes sticking to setpoint as if glued there.  Such trends have been called “Tram Line Trends”.  However as soon as a change occurs either in the process, or if the operator makes a setpoint change, then the control can’t catch the change,  The operator then usually puts the controller into manual and gets the process back to the setpoint.  Once there, he puts the control back in automatic.  (Another common fallacy is that if a loop is running in Automatic, the tuning is good).

The example given in this article is of a condensate pot level which was always cycling.  The condensate pot was very small, and the level could change very rapidly.  (Integrating processes with small retention times are always much more difficult to control than those with long retention times).  This loop presented a huge problem for the operators.   They could hardly control it in manual, and obviously they couldn’t have someone devoted to sitting continuously on the panel trying to keep this level within limits, so they had it running very badly in automatic.  However load changes caused the level to frequently reach trip limits.  Many attempts had been made to tune it properly, all to no avail.

When I was recently called into the plant this was the first loop they asked me to look at.

Figure 1 shows the “as found” closed loop test which is conducted with the controller in automatic with the existing tuning parameters.  Normally one performs several setpoint changes to observe response, but in this case it could be seen that the process was moving all over the place so the test shows the performance with a constant Set Point.  We then tried to get the process balanced in manual which is a prerequisite if one wants to do any real analytical and tuning test on an integrating process.  However this proved impossible, with the level jumping up and down, and moving around erratically.

Then when looking at the P&ID drawings it was seen that there was an old flowmeter in series with the control valve which had been forgotten about and was never used.  That is usually a great thing as one can judge valve performance easily and directly by measuring how the flow through the valve reacts to changes in valve position.  I was excited about this but was told that the flowmeter was not working properly and that it was way out of calibration.  However it doesn’t really matter if the flowmeter doesn’t work perfectly or is inaccurate, when all you want to do is to see how the flow changes when you move the valve. We therefore connected the flow PV to the analyser and performed a valve test. This test is shown in Figure 2, which shows three traces recorded with the level controller in manual:

In the figure one can see that four steps of 5% in the controller’s output were made in the valve opening direction.  The test reveals some very interesting information:

On the first steps in the figure where the output was being increased the flow through the valve didn’t change until the output had moved through 15%, which would indicate the valve was either stuck or subject to large play in linkages (all associated with hysteresis).  When a further 5% step was made in the same direction, the flow increased showing the valve was now moving properly.  It can also be seen that looking at the level’s PV trace that the ramp in the level reversed on the last step as the valve had moved past the balance point.

Secondly when steps were made in the opposite direction, the valve only stared moving slightly after the controller’s output had decreased by 10%.  This again indicates the same problem.  When the controller output was then moved a further 10%, the flow responded quite well, and at the same time the ramp in the level also started reversing, but it should be noted that the controller output was now at zero.  The flow PV was at about 50%, but as the calibration of the flowmeter  was suspect, this does not mean a lot.

This introduces another possible problem.  If the valve has been calibrated correctly to the controller’s output, and the valve was in fact shut (something which we were not able to check at that particular time), and as the process was running around its usual load, then it means that the process balance point is when the controller’s output is close to zero, and the valve is almost shut.  This is confirmed by looking at the level reverses on the trend of the level PV, which definitely proves that the balance point is very low down on the output of the level controller.

Once again this example shows how important it can be for controlling integrating processes like levels to be able to monitor the flow through the valve. 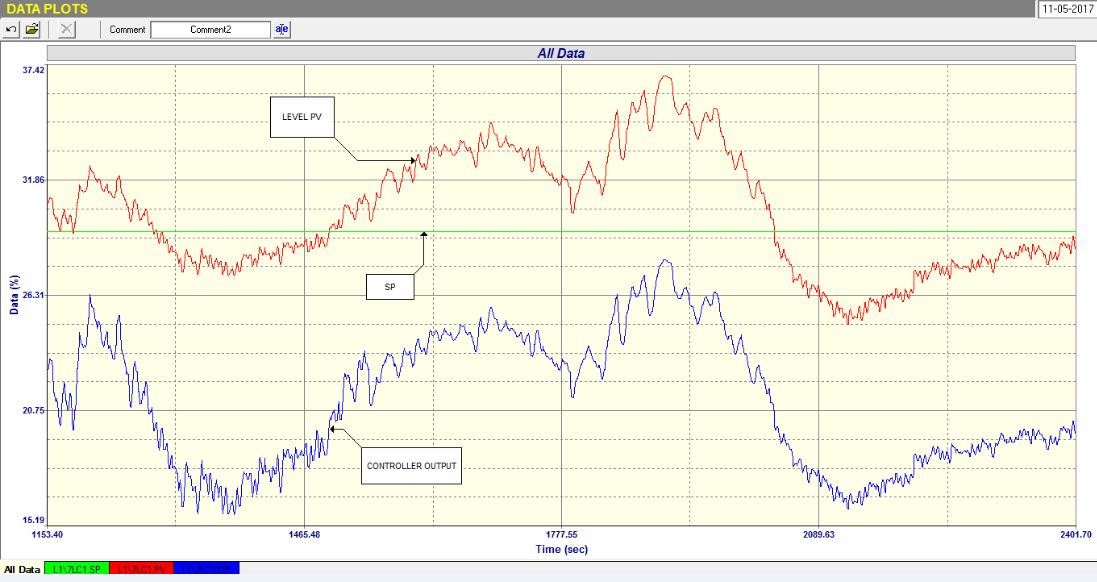