DIFFERENCES BETWEEN PLC’S AND DCS’S

A Discussion from the Practical Control Point of View

Eliakim Musikiti read one of my articles on SA Instrumentation and Control and emailed me to ask what the differences are between PLC’s and DCS’s.  I started replying to him and then thought that it would make an interesting article as I am often asked why I always prefer working in plants which run their analogue feedback control systems on a DCS rather than on a PLC.  To understand this one must go back into the history of the development of these devices.

A friend of mine recently said that he was born BBC.  Translated: He was “Born Before Computers”.  Feedback control as developed by mankind and which has been used in plants for almost a century before the digital computer came on the scene is also BBC.  It was developed into an engineering science by several brilliant mathematicians in the early part of the 20th century, and really came into general plant usage with the development of pneumatic technology. The technology then remained pretty much static until the mid 1960’s when electronic instrumentation and control systems came into commercial use, and took over from the old and relatively crude pneumatic equipment.

The electronic era was a marked leap forward for control equipment as electronics is far more accurate and much easier to configure.

At this stage there were two departments in most plants dealing with controls, namely C&I (Control and Instrumentation), and Electrical.   The former dealt with the feedback control systems, and the latter with ON/OFF controls like motor starters etc., and with sequencing and interlocking of various machines and drives, which was accomplished by the use of devices like electro-mechanical relays, and special rotary switches when it came to sequencing.  Electro-mechanical timers were also employed.

Digital computers came into commercial use in the 1960’s, but it was really only in the 1970’s that they really started moving into the two control fields.  It should be noted at this stage the computers being used for control systems were heavily ruggedized and had extremely high reliability, as plant operation is completely reliant on their operation.  This is still the same today with the exception of SCADA systems which will be discussed later.

Analogue Control Field
The first major development in digital computing control systems occurred in 1975 when Honeywell and Yokogawa  introduced their DCS platforms to the market.  “DCS” stands for Distributed Control System.  Most of the major C&I manufacturers followed fairly quickly.

The important point of these DCS’s is that they were, and still are manufactured by companies with many years, if not decades, experience in producing feedback control systems.  Bearing in mind that the average human being is resistant to change, and at that stage many of the C&I practitioners and plant operators were not very conversant with computers and were quite scared of them, the DCS manufacturers tried to make the transition from the old analogue to the new digital equipment as painless as possible.

Operators were used to controllers and recorders sitting in large panels and being able to read the information on them quite easily on meters or pens on the front of the instruments.  The DCS manufacturers accordingly built specialised screens on computer monitors that more or less showed the same type of displays and operating controls that the Operators were used to.  As far as configuring control loops was concerned, the manufacturers tried to make loops configurable in a way that was similar to the old loop configuration.  In addition they built in many safeguards into the software to prevent errors in programming to prevent problems arising.

Another extremely important point is that they very carefully ensured that the actual implementation of the PID controllers in the software was correct so controllers would operate dynamically in exactly the same way as the old analogue controllers.
The result of all this is that plants changing over from the old electronic and pneumatic systems did so with the minimum of problems.

Digital Control Field
The first computerised “digital” (ON/OFF) control system was introduced by Richard Morley, an employee of Bedford Associates, who were involved in the automotive industry.  He proposed something called a Modular Digital Controller (MODICON) to a major US car manufacturer.  This was the birth of the first Programmable Logic Controller now commonly referred to as a PLC.  There were huge advantages to this device particularly eliminating the need for complex physical wiring, and the cost of the expensive electro-mechanical components.  In particular it was extremely easy to configure the programmes, and to make changes, which previously took a lot of effort and time.  (In the early 1970’s and after PLC’s really took off in the market, Bedford Associates changed their name to Modicon PLC.)

Once again the manufacturers of PLC’s tried to make the system easy for practitioners of digital control systems.  The first units were programmed by “ladder logic” which is almost exactly the same as the wiring drawings used for the old electro-mechanical devices.

Initial Differences Between PLC’s and DCS’s
There were no displays for the early PLC’s, and the use of push-buttons, rotary switches and indicating lamps mounted on control panels continued for quite a few years.

Thus the two control fields carried on separately for several more years, but obviously people started querying why two expensive computer systems were needed in a single plant.  Surely a single computer could combine both functions, especially as computing power had grown exponentially?

The DCS manufacturers were quite quick to start incorporating “digital” capabilities into their machines, but there was a big problem for the PLC people.  There was no easy “analogue” operator interface on their devices. whereas the DCS’s always had operator screens as an integral part of their system.  Some of the PLC manufacturers offered special interfaces for PID controllers, for example a panel mounted module with a front display which had the capabilities for an operator to switch between as many as eight PID loops.  However these displays were expensive and not terribly user friendly.

A solution to this problem appeared in the early 1980’s, when an engineer, Steve Rubin, who owned a company called Intellution in Boston, USA, started wondering why people were using expensive ruggedized computers for control.  When I met him he said that as far as he was concerned the ordinary desk PC (personal computer) had all the power and reliability to run plant controls and they were a fraction of the cost of the control computers being used.  He then developed an extremely clever system for use on desktop PC’s to operate both Analogue and Digital Controls.  The best part of his system was that it was extremely easy to configure “screens” to display any type of control device you may wish, as for example from PID controller faceplates to alarm screens, to ON/OFF control buttons and indicators, and he also included powerful trend and real time recording and logging

He introduced his system which he called “The Fix” (for Fully Integrated Control System) at an ISA show in Houston in 1984.  This was the world’s first configurable PC based HMI/SCADA software programme.  (HMI - Human Machine Interface, and SCADA – Supervisory Control and Data Acquisition).

From the actual plant control point of view, very few people ever agreed with Rubin that desktop PC’s were reliable enough to run plants on, and in fact I have only ever come across two small plants where everything ran off a PC.  However the SCADA part took off like a rocket.  Here at last was an easily programmable and configurable HMI interface the PLC makers needed to be able to introduce a full variety of analogue control systems in their products, so fairly quickly the PLC manufacturers also started offering a full menu of both Analogue and  Digital controls in their machines.

So from the analogue control point of view what are the differences between the two systems?

The thing to note is that the DCS manufacturers had a background of decades in making PID controllers and ensured that they could be configured and operate correctly.  The PLC people on the other hand had very little if any experience and knowledge in this complex field and they put controllers into the PLC’s that on the whole caused all sorts of problems.   My own experience over many years of working in all types of plants is that 85% of the time when I go into a plant using PLC’s for control, the controllers are set up incorrectly.  Therefore whenever I am called into a plant using PLC’s for control, the first thing I do is to test the controllers to see if they are working correctly, before even looking at loops.

The costs to plants with control systems working incorrectly can be unbelievably high.  My most classic example is of a pharmaceutical plant in the UK that was losing an estimated £14,000,000 (British Pound Sterling) per year all because they hadn’t set up a PID controller correctly.  I have come across 3 plants in South Africa running for many years on PLC’s with the PID controllers not really working at all, so that actual operation was done in manual control.  In most PLC plants the controls are causing many problems because they are not set up correctly.  Most plant people don’t really understand their control systems properly, and often they think it is poor tuning.  They don’t realise the controllers are not doing what they are supposed to do.  People find these things hard to believe, but I have seen all these problems myself.

The lack of knowledge of the Analogue Control side, and the fact that PLC/SCADA systems are unbelievably wide-open so people can programme in anything they like has caused many serious problems.  PID control programming is in fact very complex and few people have the knowledge how to set up the normally basic PID blocks provided in PLC’s so they operate correctly.

I have also found that programming personnel find it much harder changing things around in a PLC, than they do in plants with DCS’s.

However on a positive note, things have started to improve in recent years.  Several of the big PLC manufacturers have started incorporating DCS software into their PLC’s so the controllers work correctly.

From my point of view however I am still far happier working in plants using pure DCS’s rather than PLC’s. 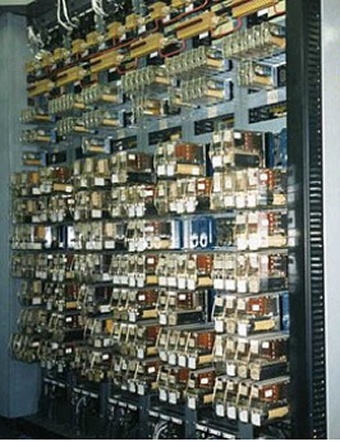