As mentioned in an earlier articles, the integral or I term in the controller is a brilliant thing. It is an extremely elegant and simple solution for eliminating offset in control. However like everything else in this world, virtually everything good has its bad side as well. In the case of the I term, it’s bad feature is that it never gives up trying to get rid of offset even when it cannot be eliminated.

Many control problems stem from the integral continuously working to try and eliminate offset. Some examples of these are stick-slip cycling on self-regulating processes and continuous cycling on integrating processes with hysteresis on the valve, all of which have been discussed in earlier articles. In addition, another problem can arise from the same cause, and this is known as integral, or reset windup.

Integral windup occurs when a continuous error exists which cannot be eliminated. To take an example, imagine that an isolating valve in series with the control valve is closed, and the controller is left in automatic. At this point let us imagine that the PV (process variable) goes to zero. The integrator in the controller will immediately start integrating to try and eliminate the error. This will result in the PD (controller's output) increasing at the ramp rate of the integrator. As the error cannot be reduced, this will continue until eventually the PD reaches a maximum limit (normally set to 20 mA in most controllers).

However it must be remembered that in theory, the integrator's output will continue to carry on ramping for as long as the error exists. In reality, in the old days of analogue controllers, this could only continue until a physical limit was reached. At this point it was said that the integrator was "saturated" or fully "wound up".

The situation is different in a digital computer. The integral is now not a voltage or pressure, but a number, and modern computers can deal with extraordinarily high numbers. Therefore unless the controller manufacturer does something about it, the integrator could carry on until the output reaches a value virtually close to infinity. This is illustrated in Figure 1.

Eventually when the isolating valve reopened the fluid will flow through the fully open control valve, and the PV will then start rising towards set point. However due to the nature of an integrator, the PD cannot start reducing, and hence the control valve cannot start closing before the set point is reached. Essentially the integrator's output cannot be reduced until the error signal on its input changes sign. This is because the integrator's output will always rise as long as any positive error exists. If the error reduces to zero, the integrator's output then remains constant. It can only start moving down after a negative error signal occurs. This means that the integrator can only start responding again once the PV has moved through the set point.  Figure 2 helps explain this.

If the integrator has wound up, it means that it may take a long while for the integrator's output to drop far enough to allow the PD to start moving down again, and at that point it would allow the control valve to also start closing. By this time an enormous process overshoot could have occurred, and large delays can occur before the controller can start actually controlling again.
To site one extreme example, a Senior Instrument Technician on a gold mine gave me an example of one of their control loops which wound up after a plant trip occurred, and on restarting the plant, the output of the controller remained at full output for 9 hours before it started moving down.

A second interesting example that I encountered recently was in a refinery.  The problem encountered was in a demineralisation plant with a water pressure controller.  This occurred when periodically clean water was introduced to perform a cleaning rinse.  The incoming water was at a much higher pressure and this backed off the controlled pressure , and limited it to a value well below set point.  This resulted in the integral action ramping up the PD to 100%  (winding-up).  When the unit went back to normal operation, the pressure jumped above set point, and it then  it took many, many minutes for the output to get back down to the normal area where normal control could operate.

The result of this is that when the cleaning water was shut-off, the controlled pressure immediately jumped some 15% over set point.  Although the proportional action does immediately dropped the PD a bit, it took the integral a further 7.5 minutes to get the control back down to set point!

The closed loop test shown and annotated in Figure 3 shows this very well.
This can be eliminated typically by freezing the integral when the rinse begins, or else putting the controller into manual for the rinse period.

During the course of my career I have encountered quite a few problems caused by integral windup, and in my experience as very few people understand the workings of their controllers the problem is not identified properly.  In one particular case in a plant that made explosives, a cheap PLC controller that didn’t have any built in reset windup protection almost caused a serious explosion as under certain conditions the controller integral wound up resulting in potentially serious temperature overshoots.  Luckily the high temperature trip system worked in every case when this occurred.

1. As a general rule integral action should always freeze when further movement of the controller’s output can have no further effect on the control.

2. In particular, in every case of an oversized valve, the integral should be frozen and a limit placed on the controller’s output where further movement of the valve can have no further effect on the PV. This will help prevent both reset windup, and valve windup.  (This is a very important point as very few people are aware of this, and every plant has many cases of sometimes hugely oversized valves or pumps.) 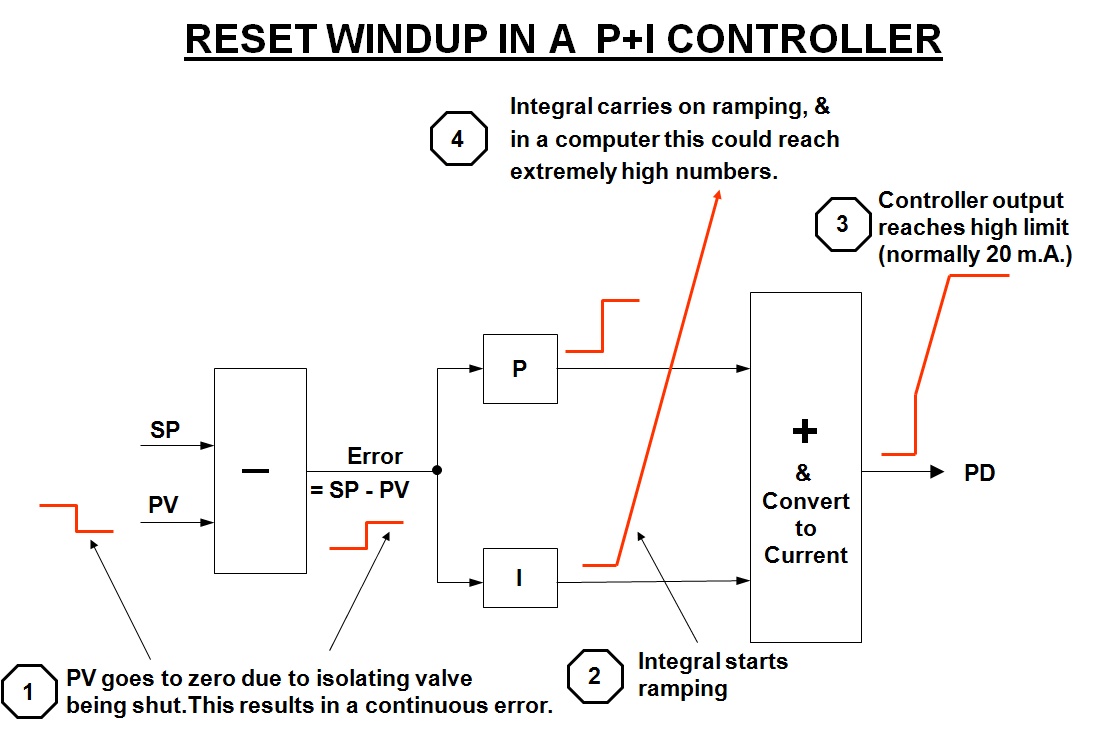 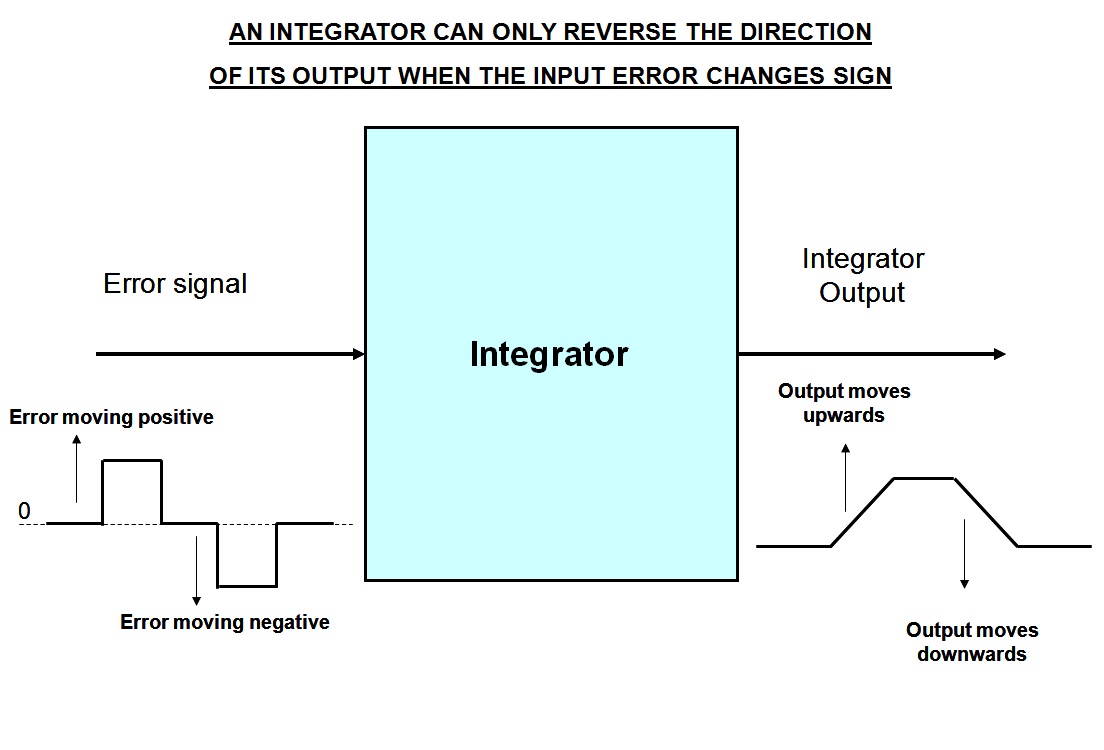 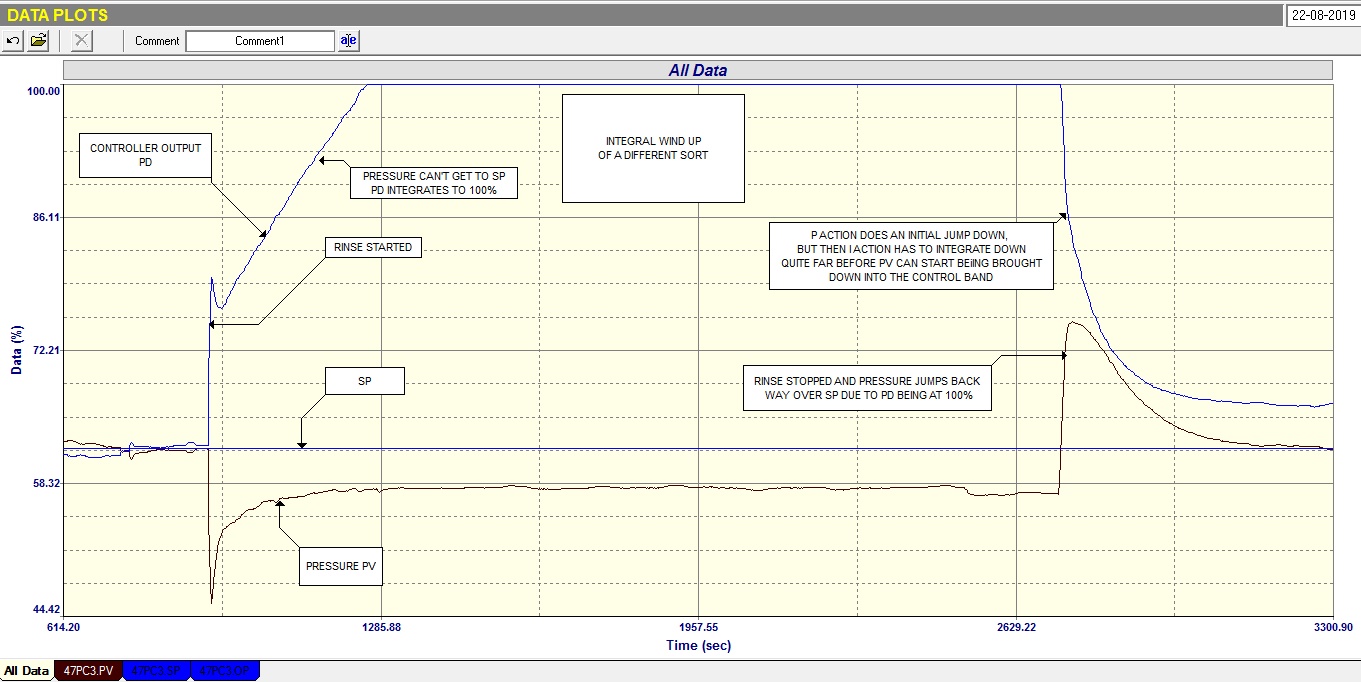