AN OVER FILTERED HYDROGEN FLOW LOOP

The example given in this article is about solving the control problems in a critical flow loop supplying hydrogen gas to a reactor in a smelter plant.  The complete production of the reactor plant, and hence the smelter, was reliant on good performance of the loop which is a secondary cascade control loop to the hydrogen pressure input to the reactor.

The operators were really keen on us getting this loop to perform properly.  They complained that it never actually got to setpoint when it was in automatic, and that the control reacted terribly slowly if there was a load disturbance or setpoint change.  As a result they mostly ran it in manual.

On examining the controller’s setup it was immediately seen that firstly for some reason there was a 1% deadband on the control, and secondly there was a 6 second filter on the PV pressure signal in the PLC.

A deadband on most controllers usually consists of a band placed symmetrically around the SP.  If the PV is within this band there is no control action.  Now the real purpose of the deadband is for use with certain types of electric actuators.  These devices incorporate a reversible electric motor which can run in both directions so as to open or close the valve.  The problem with these is that when the PV is at SP the motor switches backwards and forwards continuously as the PV moves up and down, which is normal even with only a little noise on the PV signal.  (We define noise as a random fluctuation in the PV signal, and it is always present on real life variables.  It is caused by various factors such as turbulence in a flow,  ripples on the surface of a vessel on level measurement, or something in the measuring system.)

A deadband is not ideal as it stops control action within the band, and I have often found deadbands set far too wide, some as high as 20% or more.  There are also some other problems that can occur with deadbands if the control system is not implemented correctly, which can result in continuous cycling from one side of the deadband to the other.  However the one case where they are necessary is on the type of electric actuator discussed above.

I have written a lot about the problems with noise in the past, and have shown that noise is seldom a problem as regards effects on the control of the process.  However because of general complete lack of understanding by plant personnel as to the effects of noise on control, and because of the ease of eliminating it by using filters, which are easy to implement on digital control systems, it has become common to eliminate it completely.  However few people realise that the use of filters can introduce other problems that can badly affect and cause deterioration in control performance.

The majority of control loops do not use electric actuators, but incorporate the old tried and tested pneumatic actuators.  These have natural lags in them and act as a dampener,  so most noise which is generally at a relatively high frequency does not cause a problem like valve wear.  However sometimes people try and eliminate the effects of noise by incorporating the deadband feature into the control, as they have done in this case which had a standard pneumatic actuator instead of using a filter.
(In this case they also incorporated a filter!  Really trying to ensure that the noise wouldn’t cause a problem).

So back to our example of the hydrogen flow control.  Figure 1 shows a closed loop “As Found” test which is a recording of the control responses to step setpoint changes without changing anything like deadbands, filters or tuning parameters.  It can be seen that:

1. The PV never got to SP because of the deadband.

2. The response was unbelievably slow on a SP change.  This was due to the filter and also to terribly bad tuning which was P = 0.25, and I = 24.0 seconds/repeat. 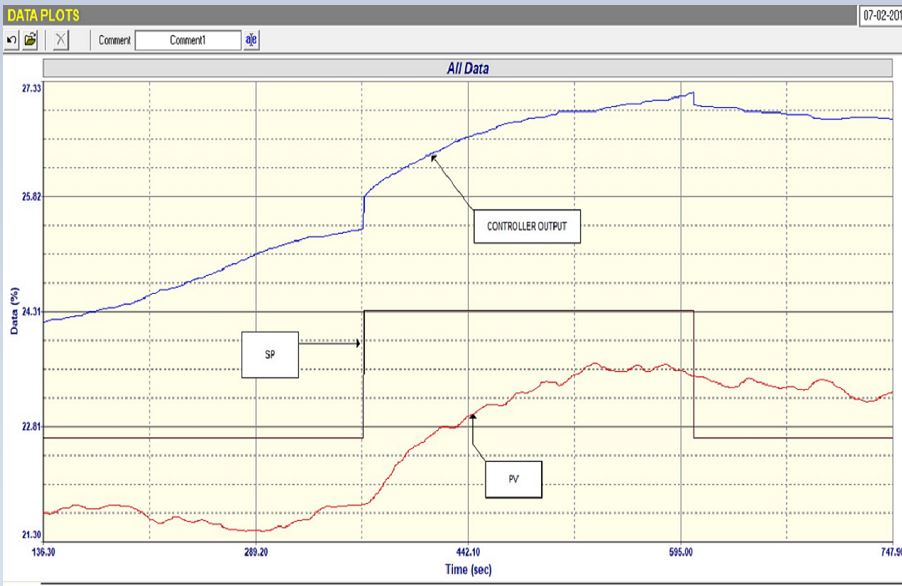 Figure 2 shows the open loop test, where the controller is in manual and step changes are being made on the PD (controller output),  The 6 second filter was removed from inside the control system in the PLC.  However from the response and based on experience it looks like there is indeed another filter (or dampening) in the actual transmitter, which we guessed to be about 12 – 15 seconds.  Unfortunately on many plants when doing these types of tests one often cannot just go out and examine the transmitter and remove filters, as the field equipment is the prerogative of another department (usually Instrument Maintenance) and they are sometimes not very cooperative and do not have people on standby to assist with optimisation.  Typically:  “Please fill in the relevant form and we’ll schedule it in when we have a chance”.

The open loop test however did show that the valve was working well, was of a good size, and had reasonably good installed linearity.  Therefore good control could be expected. 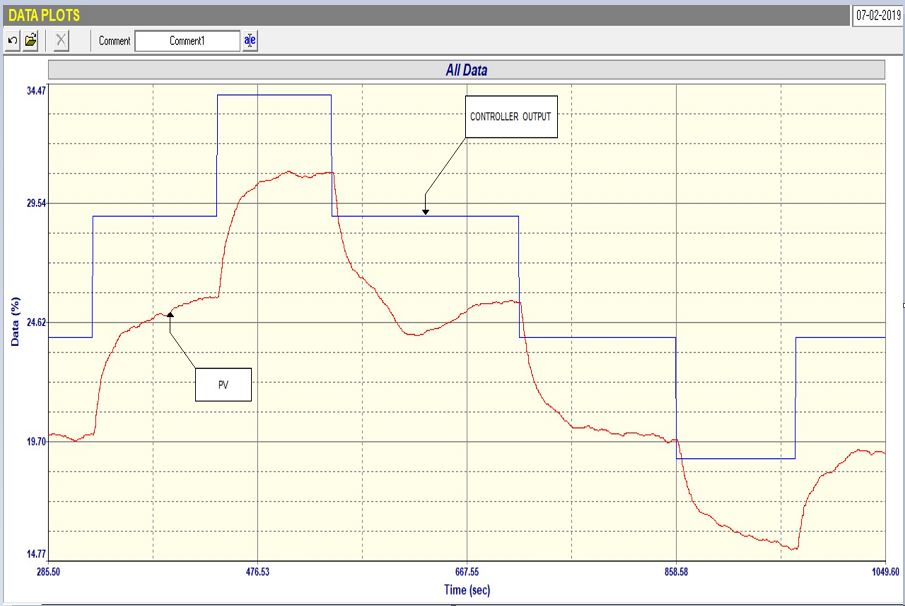 Figure 3 is the final closed loop test with tuning of P = 2.0, and I = 10.0 seconds/repeat, and with the 6 second filter and deadband in the PLC’s controller removed.  The test shows that the control is now working very much better.

It can be seen that on each of the SP changes, there is quite a large initial overshoot on the PD (controller output), whereas the PV came up to SP very nicely with no overshoot.  This is a very interesting thing and shows one of the main problems that can be encountered when using a filter.

The problem is that because of the “sluggishness” of the filter which is very large for a flow process, the tuning requires a very high P gain to be inserted in the controller. Thus when you make the SP step change, the PD shoots up.  This in turn opens the valve too far, which pushes the actual true process PV right up, and the controller then reduces the PD back down to bring the PV into the right region.

However you don’t see the PV’s overshoot because the PV we see on our screen and on the recording has passed through the filter on the transmitter, so we don’t see and don’t know there has been a big overshoot.

The thing to remember is that filters, particularly large filters, can obscure what is actually happening in the actual process, and this can be very dangerous in certain cases.  I always recommend that it is far better for an operator to see what is actually happening in his process, rather than think everything is fine.  Unfortunately many operators are used to seeing highly filtered signals, so that when you remove the filters and they see the PV jumping around due to the noise, they believe that  the process has gone unstable.

Figure 4 shows the control performance recorded over an hour with the control in cascade and the SP signal now coming from the output of the primary hydrogen pressure control loop.  The remote SP is continuously changing and it can be seen just how well this secondary cascade flow loop is following.  However one should also be aware that as the transmitter filter had not been removed when this test was performed, the picture might well not have been as good as it looks here.  There is no doubt that the filter should be removed and the loop retuned.
Another good example which illustrates how lack of knowledge of the practicalities of control can result in terrible control. 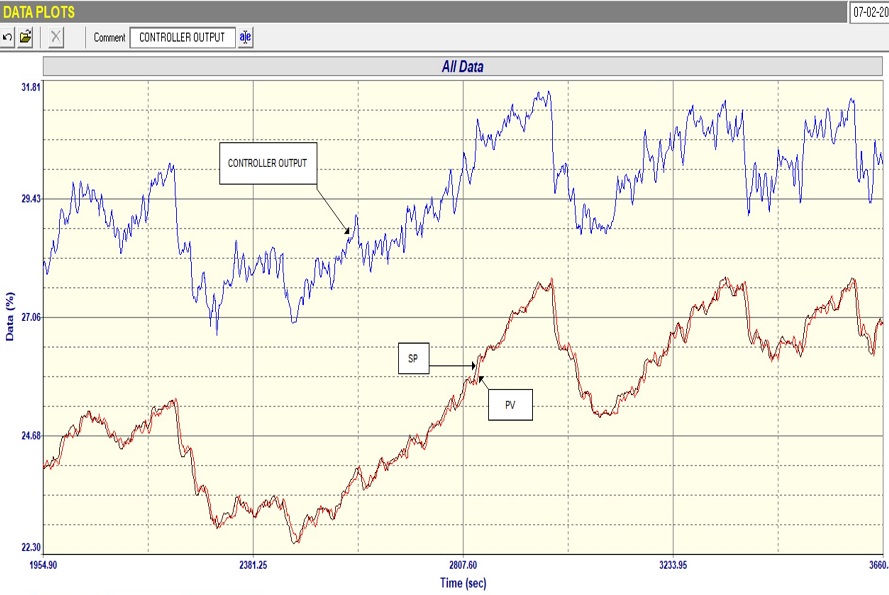 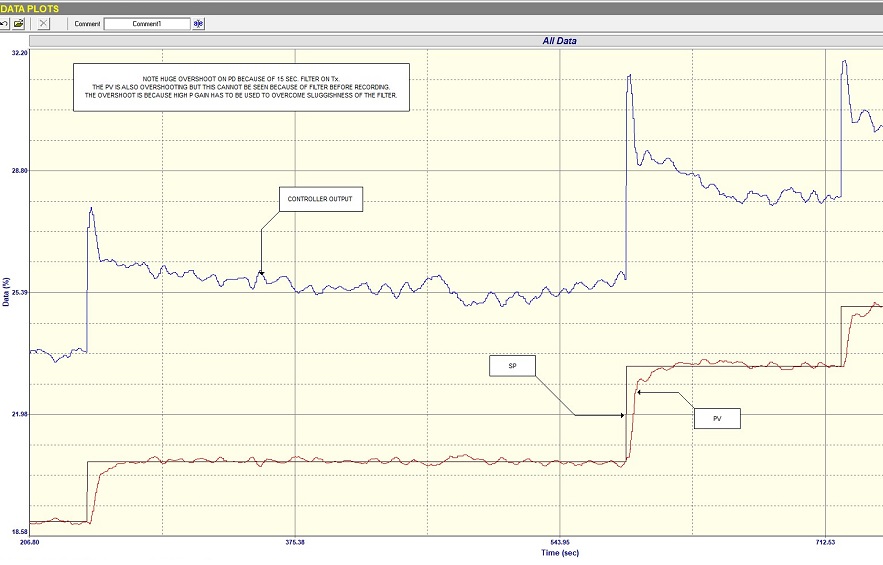