In the far distant past when I first started my own business we specialised in automating plants mainly on gold and platinum mines. Even inexperienced as I was in those days, I soon realised that the task was far from easy.

Over the past few months I have been optimising controls in mining applications including zinc and platinum mines. Once again I have come to the conclusion that controls operating in mining environments have to cater with some unique and specialised problems that are not encountered in many other industries. Amongst these are the facts that mining is a rough business with plant constructed very robustly in order to deal with extremely harsh operating conditions, and process control is a factor that is relatively far down on the list of design considerations when construction takes place. Products are also usually far from consistent. Typically ore varies considerably in physical properties including consistency, size, density, and moisture content amongst many others. It is also extremely abrasive, which makes it hard to measure it, and severely limits one choice of suitable final control elements.

Measuring physical and chemical properties in mining is also often extremely difficult. Many parameters that require measuring present unique problems. To take a few examples, slurries are extremely abrasive, and there are only a few materials that can withstand such abrasion. One often has to measure levels of fluids that vary from abrasive and viscous, to liquids that are covered by a layer of foam that is almost as dense as the liquid itself. A couple of years ago I worked on the control of cyanide addition, where the sampling type cyanide concentration analyser, had a scan (update) time of 17 minutes!  The more modern versions have managed to reduce this time to about 9 minutes, which still introduces quite a long dead time for an important measurement being used in a feedback control system.

Process non-linearity is often the norm, rather than the exception. Plants sometimes behave completely differently from day to day.

All these factors present some severe challenges when trying to optimise processes in mining applications.

The mining industry also tends to perform controls using the PLC and SCADA approach rather than using DCS's. Apart from cost saving, this is logical as the digital IO count in most mining applications is very high as compared with analogue IO's. However from the regulatory control point of view, PLC's in general are mostly very limited as compared with the DCS. Also the fact that they are so extremely versatile often creates problems on the analogue control side. This appears to be a complete oxymoron, but the fact is that definitive structures exists when laying out control loops in DCS's, which is not the case with most PLC's. People programme control loops the way they wish, and often as they are not really familiar with control practicalities, they do things which adversely affect the control. Also over the years, different people work on the programme and make changes. It is often extremely difficult to try and find out exactly what is happening in the control loop and control strategy.

Apart from this it may sometimes be very difficult to perform optimisation procedures on PLC control systems, as the programmer may have not allowed for structures typically to change from Auto to Manual, and from Local to Remote setpoint as examples. Many times in my career, I have wasted hours if not days in plants waiting for people to try and sort out simple things like this on PLC's. On one famous occasion it took 3 weeks to locate a large filter buried deep in a sub-routine in the programme, on a critical control loop.

Another interesting example of bad programming was a case on a smelter furnace pressure control, where the control valve should never close completely. The loop had never been in manual. After switching it into manual we performed the necessary open loop tests, and then switched back to Auto with the new tuning. Unfortunately for no known reason, the programmer has included a sub-routine to initially close the valve when switching from Manual to Auto. This resulted in a minor explosion which cost the plant close on R100,000 in replacing all their safety bursting plates and in lost production.

In this article I have included a few interesting examples of control problems found recently on mines.

Figure 1 shows a closed loop test on a simple flow loop where a setpoint change was made with the "as found" tuning. This illustrates typically bad tuning with the proportional gain too high, and the integral far too slow. The result as can be seen is a cyclic response with the process variable not getting to setpoint.

Figure 2 shows a similar closed loop test on another flow loop. This time the loop is in a continuous unstable cycle.

Figure 3 is the open loop test on this loop. It displays 2 serious problems , namely the valve is over 3 times oversized (the process gain is given by the ratio of PV step size to PD step size), and it exhibits serious negative hysteresis with the valve overshooting badly on reversals. This is a sign of an underpowered actuator. (Process gain and negative hysteresis have already been covered in detail in my Loop Signature series).

When one finds these characteristics present on a valve, the control will tend to cycle with a large amplitude.  Figure 4 shows the best result that could be obtained without completely detuning the loop. The cycle is now a "stick-slip" cycle of some 8% amplitude.  This is due to the valve problems and is not a tuning problem. Such cycles, will be discussed in a future Loop Signature article. In this particular case, the valve really need replacing with a smaller one with larger actuator.

The last example here is a very interesting and very unusual one of flow loop with a valve that exhibited strange sticking characteristics which were not observable in the open loop test. Figure 5 illustrates a series of setpoint step changes in a closed loop test with "medium" tuning parameters in the controller.

It can be seen that on every setpoint change, the output of the controller responded with its normal proportional change followed by the integral ramp. However the actual valve did not move at all until the output had moved some 5%. This caused an 18 second delay before the process started responding to the setpoint change.

Things like this can and do cause havoc in control systems, and one tends to find a lot of them in mining applications. 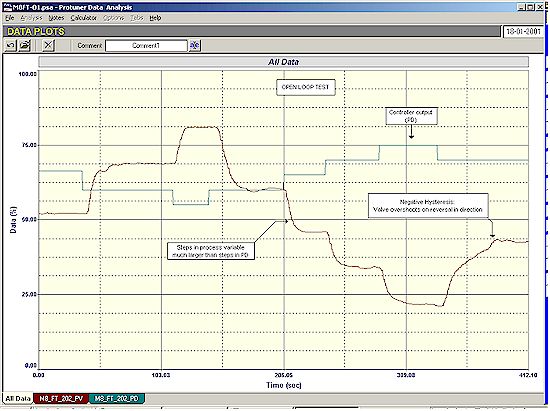