Money being wasted: Improve the performance of your base layer controls

This article has recently been published in a leading magazine serving the Pulp and Paper Industry.  However I think many of the regular readers of my articles will find it interesting.

Very few people are aware of the most amazing fact that the vast majority of the regulatory (base layer) controls are not operating properly in virtually every plant world-wide. Based on the author's and his colleagues experiences in literally hundreds of plants in seven countries, typical figures are:

The reasons behind these facts are complex and manifold, but the main reason is that regulatory control is based on highly mathematical theory which is almost impossible to apply in real life. On entering the field, most control practitioners immediately find they cannot use the theory they were taught, and they then start "trying to fly by the seat of their pants". In general they have very little understanding of what they are doing.

Courses that teach the true practicalities of process control have only recently been available. These impart a really true understanding of the subject, and even people with years in the field have found these courses an absolute eye-opener.

Why is it important to get controls working properly? The answer to this is because the purpose of the controls is to try and keep the processes throughout every stage of production at values set by process and production specialists in accordance with a carefully designed manufacturing strategy, or alternatively they are set by advanced control systems like those typically found on paper machine basis-weight and moisture control systems.

The financial implications to the profitability of the production processes can be huge if the processes do not stay at those setpoints with minimal variance. Typically a study in a large USA pulp and paper company recently showed that the estimated annual loss of profit in a 300 control loop plant would be typically US $350,000, based on only 35% of the loops not working well. If 85% of the loops are not working properly which is what we find in nearly every plant we go into, this figure becomes enormous.

Unfortunately due to the lack of training on practical control, and with a general acceptance of existing control performance which goes back over many decades, even experienced control engineers and technicians are not aware of just how badly the controls are performing, and what huge amounts of profit are being lost.

Many people find it extremely hard to believe their plant controls are not performing properly, and question our findings. They reason that if the controls are so bad, how is that they are making product?

The answer to this is that in reality most plants manage to operate and produce product entirely due to operator intervention. When a plant is running under steady state conditions (which most plants do for most of the time), then operators tend to put the controls into automatic, and everything looks good with processes on setpoint. It must be realised however, that under steady state conditions very few changes occur in the process. However if a load change does occur, or if the operator wishes to move the setpoint, then what happens in nearly every plant is that the operator switches the loop to manual to deal with the changes, and only puts it back into automatic after the process reaches stability again. The reason for this on most loops is that the controls are performing so badly that they cannot deal with the changes adequately in automatic.

To illustrate the performance of controls in two pulp and paper plants which the author has worked on during the past two years:

35 of the most important loops on a recently reconditioned paper machine were audited. These had been previously "optimised" by an overseas consultant from the vendor of the DCS control system. (The reason the word "optimised" has been put in inverted commas will become clear when you read the findings below).

1. The most staggering finding was that a special factor was set as default in the DCS so that all loops were set to respond to setpoint changes extremely slowly without bumping the process. No one was aware of this. Although this can be desirable in certain instances, it can have major impacts on the control. For example:

2. There were oversized filters on all flow loops (both on the transmitter and on the AI cards). Filtering masks things that are happening in the process and can also lead to other problems.

5. 1 loop could only get to 30% of the process range with the valve fully open and could never get to setpoint.

6. There were 2 systems in the machine, each consisting of several loops which had poor, and largely unworkable process and control strategies.

This large plant has quite a few paper machines. The audit work was done on 95 loops on various machines and processes, selected on a more or less "ad-hoc" basis by process experts.

1. The existing control on 89 of the loops was unacceptable. That is only 6 loops were operating reasonably well!

2. 7 loops had such serious problems that no optimisation could be performed on them at all. Major reworks will be needed to be done first.

3. 20% of the loops needed control strategy changes to enable good control to be obtained.

4. Roughly half the loops had unacceptable valve problems.

5. 18% of the loops had problems on the measurement side, including heavy over-filtering.

6. 3 loops were cycling continuously in automatic, and were running in manual all the time.

If controls are running so badly, it needs little imagination to "guesstimate" what enormous benefits both financially and quality-wise could be gained if the controls were improved so that at least over 90 - 95% of the loops were operating really well.

The only way that this can be achieved is for plant personnel to accept that optimisation must be recognised and instituted as a separate discipline in the plant. It must have full top and middle management backing, for without this any optimisation effort is doomed to failure.

Optimisation must also be a joint cooperative effort between the instrumentation and control people, process people, and operators. Again it can only succeed if all these disciplines work together. This means that all people must have some understanding of practical control if they are to succeed in this task. Courses of various levels are available for this purpose.

Alternatively optimisation can be undertaken by knowledgeable outside consultants. However they must work alongside, and receive full cooperation from the plant personnel.

Once optimisation of a plant has been completed, a very useful tool is now available on the market. This is a continuous loop performance monitoring package, which can immediately pick up any performance degradation in any control loop, and can email or SMS a warning to a responsible person.

A few examples taken from the work done in the two paper mills listed above are given:

The first example is taken from the moisture control on one of the drier sections on a paper machine. Steam is injected into the rolls and controlled at a particular pressure. The setpoint comes from the advanced control system which is trying to ensure that exactly the right amount of moisture is left in the paper. This setpoint is more or less continuously ramping up and down. It is extremely important that the steam pressure follows the setpoint as closely as possible, as poor paper moisture control does have a negative effect on profitability.

Figure 2 shows the same control after optimisation. The pressure is following setpoint so closely that virtually no variance can be seen. The control is now operating about 2,000 times faster. Imagine what potential profits the plant has lost over the years with the previous poor control! (Incidentally it is normal for us to find all the moisture controls on a paper machine detuned, as this particular type of process has very strange dynamics, which requires special tuning).

Figure 3 shows a test on an important steam differential pressure which is part of the control systems on a drier section. At the beginning of the test the loop was in automatic, and it can be seen that the process is in a continuous cycle. The controller was then put into manual and some step changes were made on the output of the controller. It can be seen from the pressure process signal in this test that the valve is sticking, and the controller output has to move through 6% before the valve actually moves. Once it moves it overshoots by over 100%. Sometimes it sticks at the new position, but at other times it comes swinging wildly back. On one occasion it actually cycles twice before settling out. It is obviously impossible to control with a valve like this.  The question is how was it possible for nobody to be aware of this problem before this audit was performed?  Especially on an important control like this. It certainly gives a powerfully convincing motivation for the need to have a continuous loop performance monitor installed. Such a device would immediately give warning of such a problem.

In conclusion it would appear obvious that plants are currently loosing huge amounts of potential profits mainly through complete ignorance and unconcern of plant personnel as to how badly their controls are behaving. 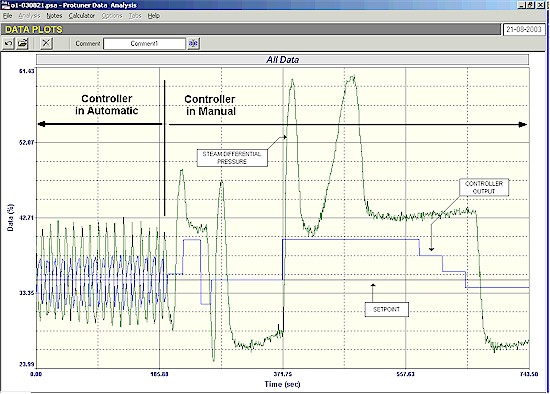 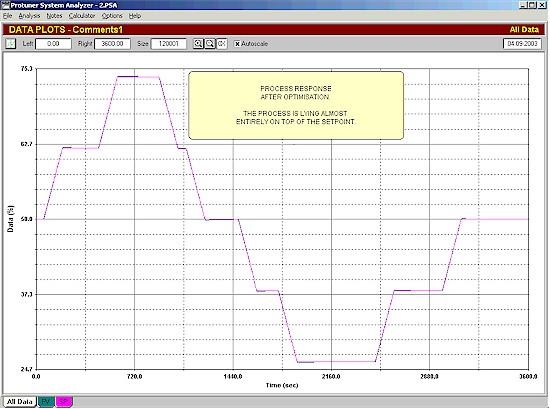 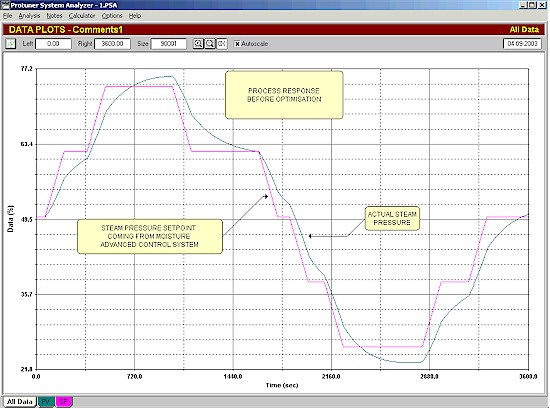