I was recently in a plant which is having problems with controlling the start-up of several large conveyors each of which are driven by several large motors. I was asked for advice, and the following is taken from my report to the client.

The control system on each conveyor was designed to facilitate the start-up of a conveyor without causing excessive stress and overheating on the drive motors.  Each conveyor has three or four drive motors, some of them being in pairs which are hard-coupled by a drive shaft; the motors in a pair being on either side of the conveyor.  A fluid coupling connects each motor to the conveyor drive roller, its purpose being to allow the motor to take up the load at a relatively slow ramp rate.

The fluid couplings are the type which effectively consist of two concentric cylinders, the one driving the other at a speed which is dependent on the amount of oil between the cylinders.  "Scoops" or vanes (as I will call them hereafter), which are positioned by a vane guide arm, regulate the flow of oil into the space between the cylinders.

The vane guide arm is positioned by an actuator which is a reversible electric motor driven by pulses in the one direction or the other.

A controller block in a well known make of PLC has been specially designed to drive normal electric actuators was used for the control.  The PV input to the controller is motor power in KW.  The setpoint input is from a ramped programme written in the PLC. The outputs from the control block are directly in "raise" or "lower" pulse trains.

There is no position feedback signal of vane arm position, and there are no end-limit switches to stop the drive at when the arm reaches its end positions.

The client was having many problems with this control system, and it seemed to need retuning very often. There were many complaints about it from operational staff.

Fluidic couplings are notorious for problems which include, hysteresis, deadband, and non-repeatability, particularly if the oil level in them is not kept constant.  The latter in particular is very important, as it means that the dynamics of the coupling change with differing oil levels.  It must be noted that the controller which controls the position of the vanes in the coupling can only normally be tuned for one particular set of dynamics of the coupling. If these change one has to retune the controller.

Apparently various people, including some not in the automation and control department, are frequently working on the couplings, refilling oil, and readjusting the vane mechanical limits. This is unacceptable for good control.

Another major problem is that the vane lever position is not measured, so that the controller cannot know its true exact position - see also below.  There are also no limit switches on the vane lever to stop its drive motor from trying to move it out of limits.

Another bad problem in the control of the power is that the vanes only start taking effect and allow the motor to start putting power into the drive when the vanes have moved considerably from the bottom limit - apparently as much as 80% on some units. The result of this is that there is a considerable period of deadtime when starting the drives and ramping up the power setpoint, before the vanes start taking effect.

A final problem is that it appears that the relationship between vane position and power is probably very non-linear.

It appears that in some instances different drive motors are used on the same conveyor, even with different power ratings. This is definitely not good practice.  Ideally motor characteristics should be matched as closely as possible for all motors on a particular conveyor. They need this to share the load as equally as possible.

The PLC control block which was used, and as mentioned earlier, has been specially written for control systems like this with pulse outputs.  Unfortunately there are some severe drawbacks in this block particularly when there is no actuator position feedback signal, which makes scientific tuning almost impossible.  The PLC manufacturer themselves in the manual state that the control is "approximate" as the controller has to "simulate" the actuator position.  The manual on this controller is also impossible to understand. Even some of the parameters are given in a foreign language.  It is very unlikely that anyone apart from experts in the company manufacturing the PLC, which is overseas, would really be able to fully understand this controller.  A lot of the features in the controller are blocked from user input and one cannot make adjustments.

Ideally all motors on the same conveyor should be of the same power rating and matched if possible.  However this may be difficult to implement at this stage due to cost.

The existing controller block and structure should be scrapped.  It would be far better to use the standard continuous controller block in the PLC, which is extremely versatile, and which is far easier to understand, set-up, and tune.

Two of these control blocks would be used, the one to control the vane position, and the other to control the power. The reason for this is that both of these processes have entirely different dynamics, and each controller would be tuned to deal with the specific individual dynamic. The output of the power controller, referred to as the master controller, would set the setpoint of the vane "slave" controller. A good way to think of this is that the slave controller is specifically tuned to deal with the dynamics and inherent problems of the fluid coupling, and thus will ensure that the coupling provides the power into the system as demanded by the master controller.

The master power controller can now be tuned relatively slowly to ensure robustness (safety of tuning), for varying conditions that will occur such as varying belt load at start-up.  A slow tune is a robust (safe) tune, which is fine, as it not necessary to start-up a belt quickly, and it has the twin-fold advantages of ensuring that the two control systems don't interact, and also that tuning should not need changing very often, even with dynamics in the coupling changing with time, temperature, and differing oil viscosity.

The purpose of the bias power adjust is to allow very easy adjustment of load sharing between the various drive motors on a conveyor, particularly when running after start-up.  Such adjustment can be done manually from the SCADA or else if the system is really successful, and the load sharing varies a lot, then a not too difficult programme could be written in the PLC to perform it automatically.

The power lineariser block is to linearise the relationship between vane position and motor power. This allows a single tuning in the power controller to be optimal across the entire range of vane position.

Virtually the entire control strategy shown in Figure 2 can be implemented in the two controller blocks. The pulse output is a standard option in the controller. The bias  power adjust can be performed through the "disturbance variable" input in the power controller, and there is provision in the system to incorporate a lineariser block in the vane position controller.

This proposed new system will definitely be far more effective and stable than the existing one, provided it is implemented correctly. 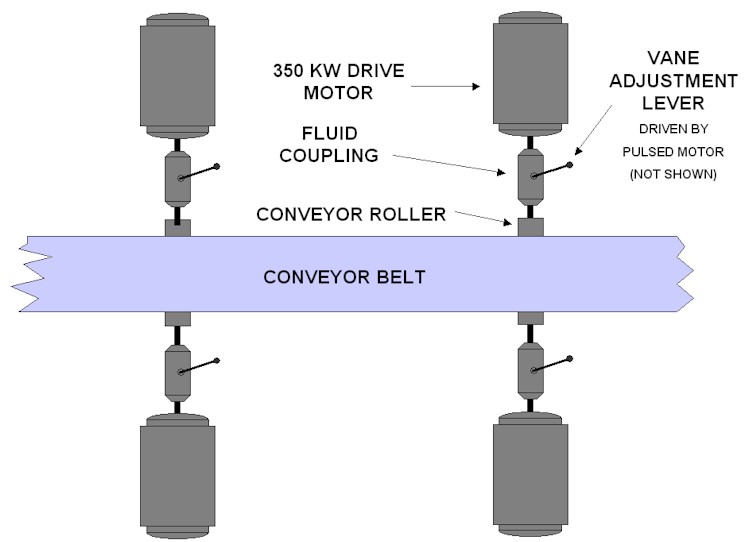 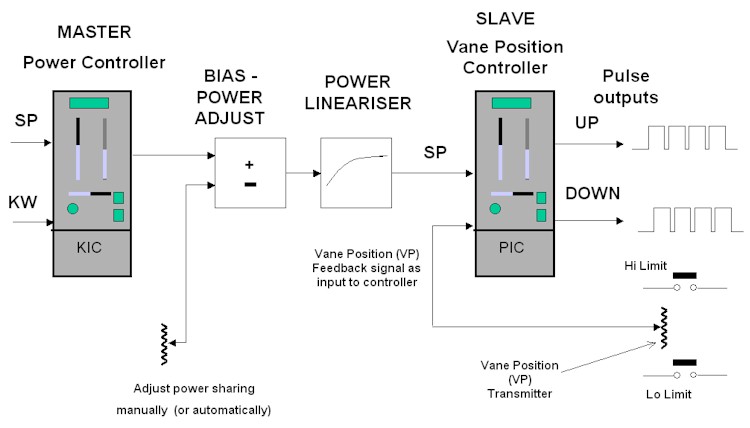