This article will discuss the two classes of processes called self-regulating and integrating (or ramping) processes.
This subject is absolutely vital to regulatory control but strangely is seldom taught on control courses, and in fact there are very few instrumentation and control personnel who have even heard of this subject.
From the control point of view, every process falls into the one or the other of the two classes.  They behave, and are tuned very differently.  It is essential that one must fully understand the difference if successful optimisation is to be achieved. 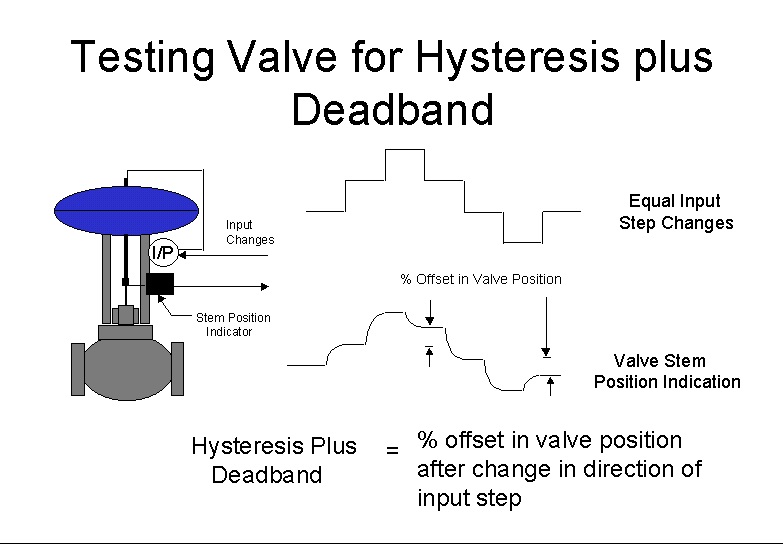 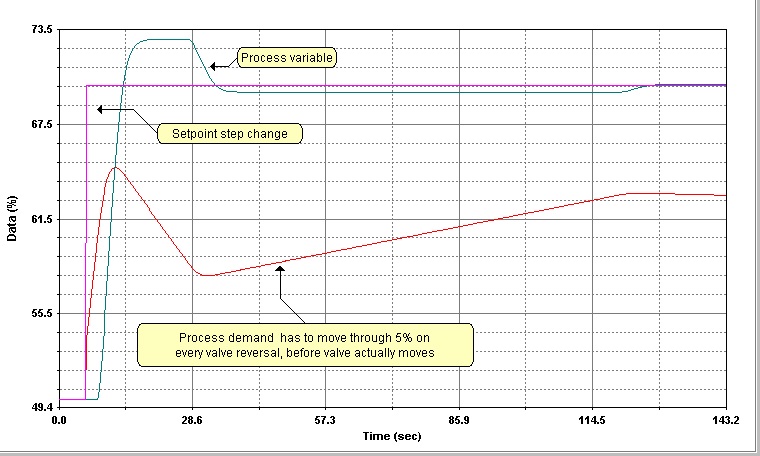 A typical example of a self-regulating process is the flow process shown in figure 2.
The process variable (PV) effectively follows the movements of the process demand (PD).
Integrating processes however, which are typified by level control processes as shown in Figure 3, have a very different relationship between PD and PV.

All integrating processes rely on balancing the input and output of the process to keep the PV constant.  In the case of the level control, the PV remains constant when the PD has the valve at such a position so that the flows in and out of the tank are equal.  When this condition exists, the process is said to be balanced, and the PD and actual valve stem position are said to be at the balance point.
If the PD is stepped away from the balance point, the inflow and outflow will now differ, and the level will either move up or down, as the case may be, in the form of a constant ramp.  If the PD is left at the same place, the ramp will continue until the tank empties, or overflows.
This means that an integrating process is inherently unstable, because if left in manual, the balance point will change sooner or later due to load changes, and the process will tend to "run away".  Therefore integrating processes cannot be left unattended in manual for too long, and in fact must really be controlled in automatic.  Self regulating processes on the other hand are inherently stable and can be left in manual.
In view of this one could query why self regulating processes need to be controlled at all.  The main reason that controllers are used for the vast majority of self regulating processes is to cope with load changes.  (Load changes can be defined as a change in conditions external to the loop causing the PV to change, and to move away from set-point). Of course in some cases the controller is there to make the process follow setpoint changes. 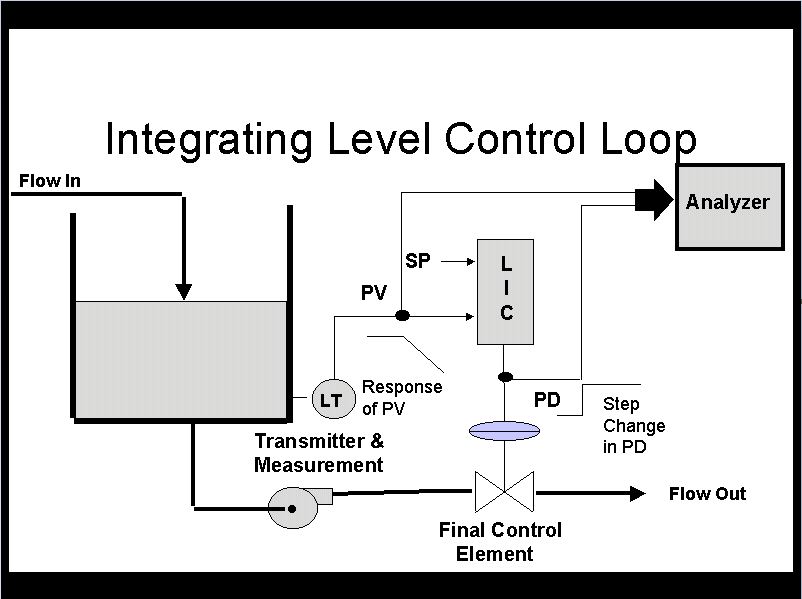 It can in certain instances,   be very difficult to decide in which class a process should belong, as some processes appear to be both integrating and self regulating  For example take the case of a level process similar to that illustrated in Figure 3, but without the pump at the bottom of the tank.


Other rules of thumb are that flows are always self regulating, and levels integrating.  One exception on levels, is controlling the head over a weir, which is self regulating.  It can be sometimes quite difficult to decide into which class of processes pressures and temperature processes fall.  One way to decide is to look at the response of the processes to changes when the loop is in manual or in automatic.  Typical responses are shown in figure 4. 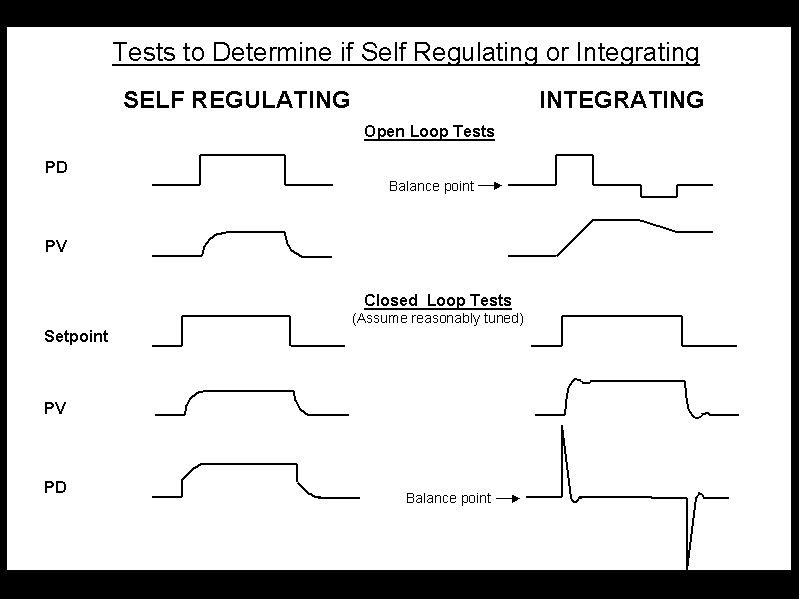 The importance of understanding the subject cannot be over-stressed if you wish to successfully optimise controls of processes.  Most people have a basic feel of how self regulating processes operate, and how to go about tuning them.  However in general very few people have any understanding, and even more importantly, any feel on how to tune integrating loops.
In most plants I go into the integrating loops are in a shocking way, mostly being so badly tuned that they exhibit very slow cyclic responses to setpoint or load changes.  Many are in a continuous  very slow cycle.  I was quite amused recently, when after an in-plant course in one of South Africa's largest petro-chemical refineries, the chief control engineer, a man with high qualifications, and many years of experience behind him, admitted to me after the course, that the section on optimising integrating loops had been a real eye opener to his staff and to him, and that he now agreed that probably not a single one of the many hundreds of level loops in his plant had been tuned correctly.

Figure 5 illustrates a typical example of an "as found" level control response to a step change in setpoint, and figure 6, the response on the same loop  after proper tuning for "tight" control.  It should be noted that not all levels are tuned this way, as in some processes the level control is detuned to prevent the control valve from moving around too much, but this is the subject for another discussion. 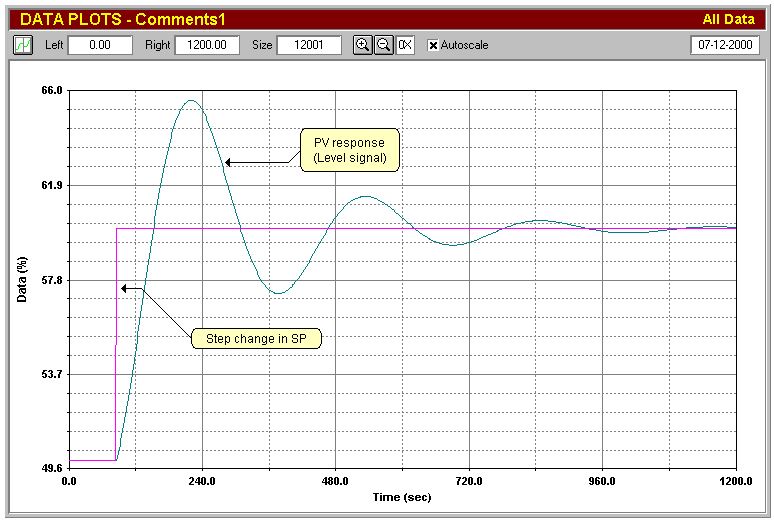 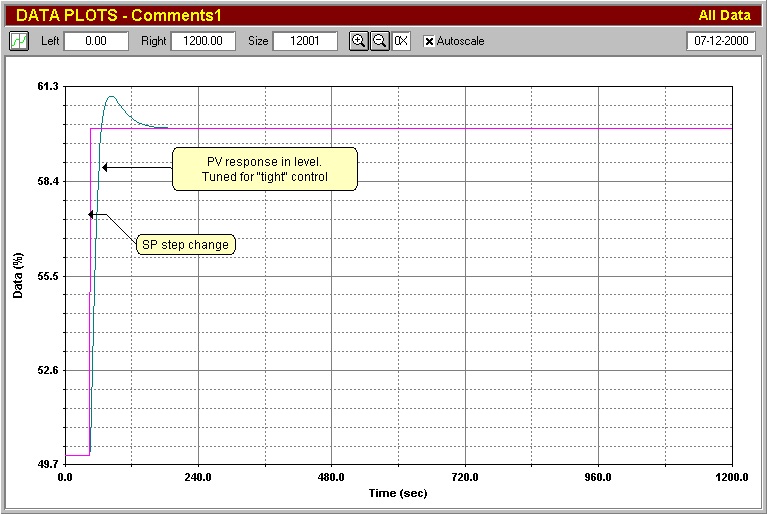