There are many types of final control elements including valves, dampers, feeders, louvers, and variable speed drive devices, although in general the vast majority of final control elements found in the industrial control world are pneumatically actuated valves  (typically as illustrated in Figure 1).  It is impossible in this limited series of articles to go into great depth on all the various subjects and problems that can be encountered.  What I am attempting to do here is to outline some of the practical problems, and some 'rules of thumb' relating to final control elements that can affect control in the real world.  Most of the points specifically apply to pneumatically actuated valves, but may well also be relevant to other devices as well.  It is also assumed that in the general term 'final control element', we are talking about all the components involved, including the I/P (current-to-pneumatic) converter, air pressure regulators, valve actuator, the positioner, and the valve itself. 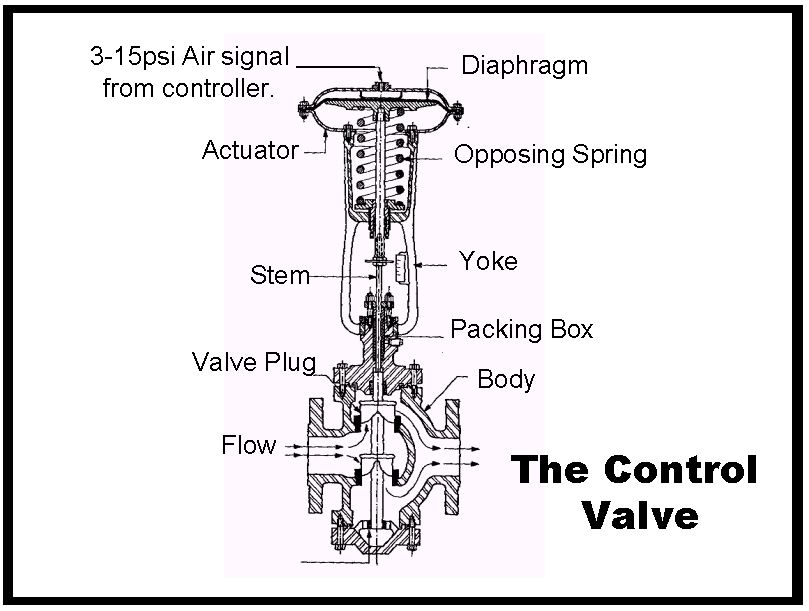 The actual purpose of the final control element is to regulate the flow of the process fluid strictly in accordance with the dictates of the controller output (PD).  In other words the valve must move to a position represented by the value of the PD.  The faster and more accurately the valve follows these dictates the better the control variance becomes.
The importance of the final control element cannot be overestimated.  Many people mistakenly believe that the valve is not really critical to the control performance.  Their thinking is that if the PD tells the valve to move to a particular position, and if the valve doesn't get right to that point, then what matter?  There is always the I (integral) term in the controller, the purpose of which is to eliminate control error, so if the valve doesn't get to the right point then the controller will keep moving its output until the valve does actually get to the correct point.

This thinking sounds reasonable, but in reality it completely overlooks the time factor, and the fact that the integral influence is very small near setpoint (as will be discussed in the section on controllers at a later date in this series of articles). To give an example, a controller on a fast process (like flow), with a time constant of about 1 or 2 seconds, where the controller is tuned with fast integral, might take over 30 minutes to finally get a bad valve to the right position.  On slow processes like temperature with time constants of many minutes or even longer, where the controller is tuned with slow integral, it may take the controller literally many hours to get the valve positioned correctly.  One 'rule of thumb' right away is that on slow processes, you cannot afford a poor valve if you want even half-reasonable control.

The majority of problems encountered in the control loop are to be found in the final control element.  The reason for this is that whereas other components in the modern loop like the measuring transmitter and controller are sophisticated devices, equipped with the latest technology from the fields of physics, electronics, and computerisation, and generally with absolutely minimum of moving parts, if any at all, the valve in essence is a mechanical device where one 'chunk' of metal must be positioned accurately and repeatably inside another 'chunk' of metal, often under extremely difficult process conditions of temperature, abrasion, stickiness, corrosion, pressure, etc.  Any mechanical device is subject to all sorts of problems such as wear, various types of friction, repeatability, and rangeability.

To give an idea of the problems encountered in typical industrial plants, a large South African petro-chemical refinery optimised over 3,000 control loops in their plant.  The engineer in charge of this project reported that over 80% of the valves had to be worked on, or even replaced, before reasonable control could be achieved.  One of the largest manufacturers of control valves in the world offer a service in the USA and Europe whereby they go into plants (using any make of valve) with computerised valve diagnostic equipment and give a report on the state of the valves.  The head of the UK branch told me that on average, the first time they go into a plant, they find generally between 70 and 75% of the valves in the plant have noticeable problems requiring correction if reasonable control is to be achieved.

There are many makes and types of control valves.  A proper control valve specifically designed for modulating control purposes is an expensive device.  Therefore people often go for cheaper alternatives, using typically valves designed for manual operation, but fitted with an actuator, and sometimes a positioner.  This can be sufficient for the control required, but the maxim remains:  "If you want good control you need a good valve".

The chief features of a good valve is that many years of research, design know-how and experience has been put into it by the manufacturer to make the valve perform properly.  This performance will include accurate, repeatable positioning, generally as quickly as possible, under all the specified operating conditions.  In addition most manufacturers attempt to get the valve to respond to step changes as exponentially as possible.  A little known fact is that in PID control, different tuning would in theory be needed for different sized step changes if the response is not exponential, as will occur for example on electrically actuated valves, which operate with a ramp response.  (In reality this is a minor problem, and would only possibly have a real effect on very fast processes).

The use of a positioner on pneumatic actuated valves is essential.  I have often come across people who believe that one should try and avoid positioners if possible.  Typical thinking includes the belief that positioners cause instability, that they shouldn't ever be fitted to small valves and others.  However a positioner is a must, if you want good control.  A good manufacturer will ensure that the positioner on the valve does not cause instability if set up properly.

A positioner does not however make up for an underpowered actuator.  The actuator is the device that actually provides the motive power for the valve, not the positioner.  The latter merely ensures that the actuator does move the valve to the correct point as given by the PD.  On several occasions I have come across cases where people have tried to save money by fitting smaller actuator, because a positioner was fitted.  This in fact creates an even more serious problem which we have named "negative hysteresis", and this will be described in an another article in the next couple of issues.

The correct sizing of the valve is very important as it affects the process gain.  This was discussed in a previous loop signature dealing with the importance of process gain.  The valve sizing is itself of course established using a special formula.

From the process gain point of view some general 'rules of thumb' are that for practical purposes on self regulating processes the process gain should be between 0.5 and 2.0.  In the case of integrating processes, the valve should be sized so that it is large enough to deal with the biggest load into, (or out of as the case may be), the process. At the same time the valve should not be too large so that under normal control conditions it will not operate too close to its seat.

This is an interesting point.  If a valve operates close to seat under normal control conditions, apart from the fact that it is obviously oversized, many valves become very non-linear in low operating regions.  A good guide is that the valve should under normal conditions operate at over the 20% open position, but some valve experts say that there should in fact be at least 20% of the actual flow through the valve. In the latter case, in the case of a valve with an equal percentage characteristic (see next article), it means that the valve position should be open past the 45% position.

It is of interest to note that even the best control valve does not have extremely wide rangeability, and if control is in fact required over a wide range of flows, then other strategies requiring more than one valve may be necessary.