An inherent phenomenon occurring in most control valves that few people are aware of is “stick-slip”.  This is illustrated in the test on a valve shown in Figure 1.

It can be seen that when the ramp initially started and every time it changed direction, the valve initially didn’t move, and after a while gave a little jump or “pop”.  This is known as stick-slip.

Stick-slip response in a valve is typically the result of a difference in the static and sliding friction in the valve assembly.  It occurs mainly on valves positioned by means of diaphragm-spring actuators, and is caused by an imbalance in the dynamic forces when reversing the valve.  The first time the valve is moved in the opposite direction static friction arises, as explained in a previous article.  The air pressure to the diaphragm is increased to overcome the static friction, as the valve cannot move until it is overcome.  This is referred to as the “stick phase”.

A typical stick-slip cycle is shown in Figure 2. This is a recording of an oil flow taken in a petrochemical refinery, and is a final closed loop test after new tuning was inserted in the controller. At the start of the recording the PV (flow signal) is stationery at about 1% below set point, and the valve is in the stick phase.  The controller (PD) is trying to eliminate the error, and its output is ramping upwards under the integral action.  Eventually there is sufficient energy in the actuator to overcome the static friction, and the valve starts moving, as can be seen by the rapidly decreasing flow.  As the valve moves it also slips, and it ends up on the opposite side of the setpoint, where the whole process starts again in the reverse direction.  This becomes a type of limit cycle, with a typically squarish waveform on the PV, and a triangular waveform on the PD.

The reason why this is found mostly on fast self regulating processes (typically flow loops), is because the ideal pole cancelled tuning for such processes is very low gain, and fast integral.  (On simple first order lag, deadtime, self-regulating processes, the integral is normally set equal to the dominant lag of the process).  During the stick phase the integral term is ramping and in fact it pushes the controller output (PD) too far.  This is effectively a little bit of controller “reset windup”, a subject which will be dealt with in detail in a future series of loop signatures on controllers.  In any event this is a major factor contributing to the cycle.

The stick-slip cycle is definitely a valve problem and not a tuning problem.  However, and very unfortunately, due to the general complete lack of practical control training by institutions who teach control, virtually nobody in the field are aware of this.  As a result, whenever a stick-slip cycle is encountered in a plant (which, as mentioned above, can be on as many as 15% of all fast self regulating processes), most people think it is unstable tuning, and completely and utterly detune the loop until the cycle stops.  At that stage the control has virtually stopped as well.  As a typical example, in the week I am writing this I have encountered 3 flow loops with inherent stick-slip cycles in a paper plant.  On the closed loop  tests  with the original “as found” tuning, both took close on an hour to respond fully to a 10% change of setpoint.

I have sometimes heard control engineers arguing that flow loops need not be tuned fast, as their speed of response is still much faster than general plant responses.  If they believe that flow loops taking 20 minutes or longer to respond to a 10% setpoint change will not affect control, then I reject their argument absolutely.  The function of regulatory control loops on continuous process plants is mainly to minimise variance at all stages of production.  Typically many flow loops are cascade secondaries which need to be much faster than their primaries.  (By fast tuning I am not necessarily referring to quarter amplitude damped response, but typically tuning with the gain margin increased by 100% or more from this point).  Our experience is that the improvement in performance of properly optimised plants, is  beyond most people’s belief.

It is common for people in this field to think that cycling in closed loop feedback control systems are caused only by unstable tuning.  In reality, and in our courses, we teach at least 5 different reasons for such cycling, which have nothing to do with poor tuning.

The solution to stick-slip cycling is a technique developed in the United States by David Ender of Techmation Inc.  He has given it the rather awkward name “Dead Band Reset Scheduling”, or DRS for short.  One writes a relatively simple routine into the PLC or DCS, whereby a band can be placed equilaterally around setpoint, with amplitude slightly larger than the amplitude of the stick-slip cycle.  The integral value (in terms of time per repeat) in the controller is increased by a factor adjustable from 1 - 20 inside the gap.  Normally a value of about 8 –10 suffices.  Thus, although the response to small load changes is slower within the gap, any large load or setpoint changes that result in the PV moving out of the gap, are still dealt with speedily, and the overall control variance is orders of magnitude better than completely detuning the controller. 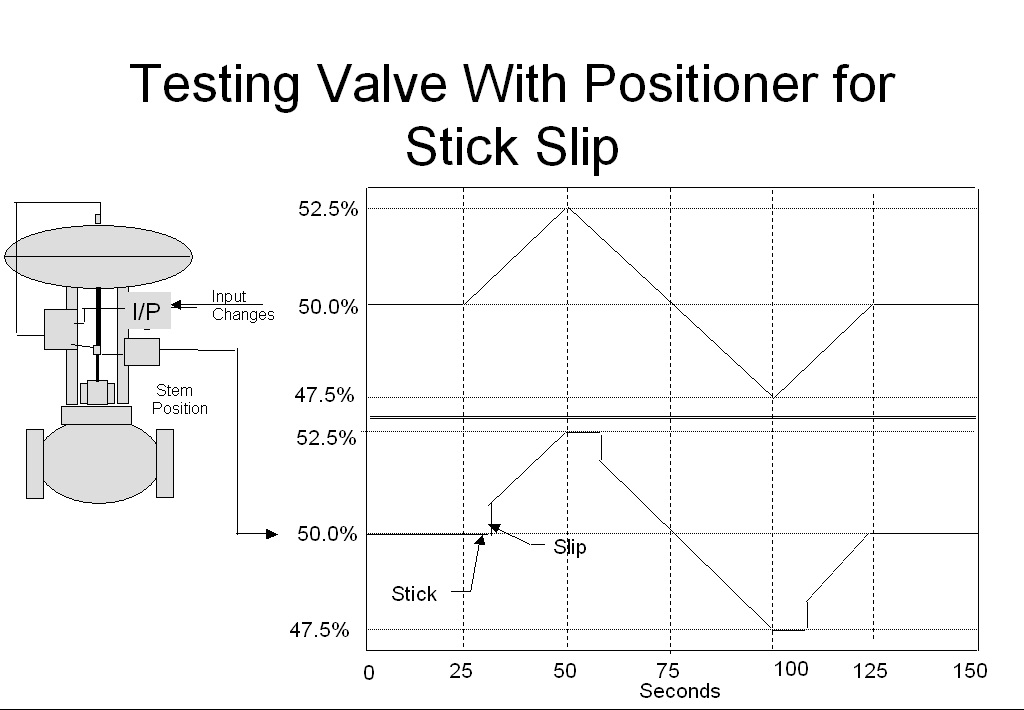 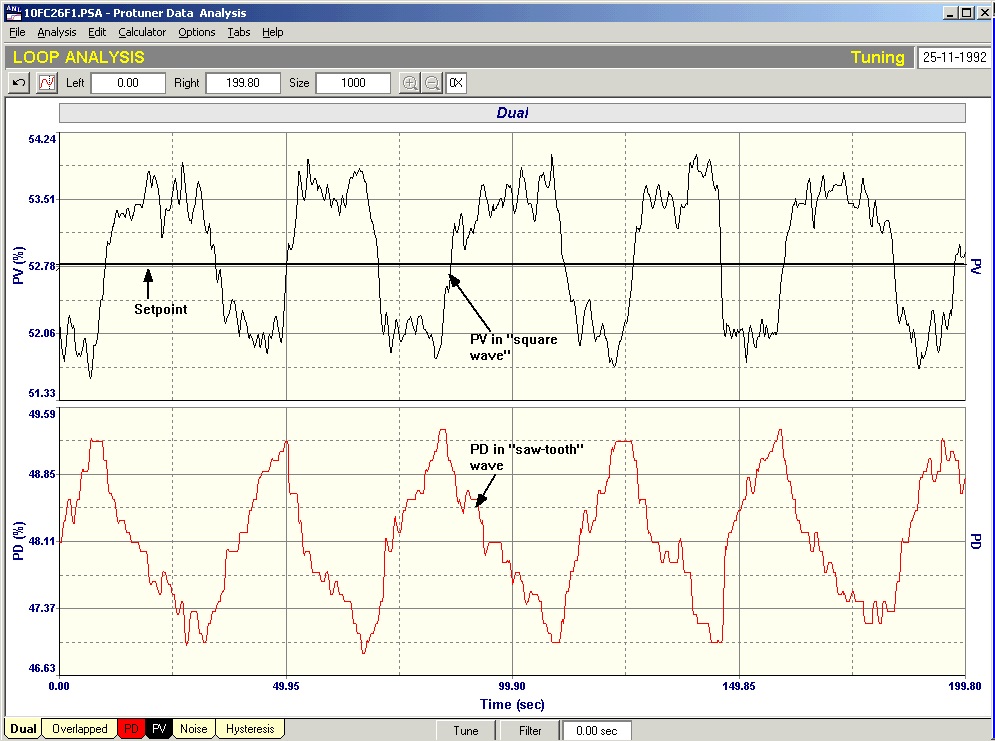